What Is Fisetin? And Does It Slow Dementia? 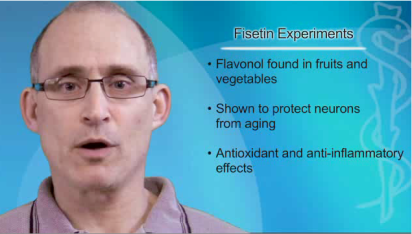 This is the Medscape Neurology Minute. I am Dr. Alan Jacobs. Researchers at the Salk Institute for Biological Studies have published a series of studies evaluating a flavonol called fisetin, found in many fruits and vegetables, that has been shown to protect neurons in the brain from the effects of aging. The compound is known to have both antioxidant and anti-inflammatory effects on brain cells. They have now investigated the memory-protecting effects of fisetin in a strain of double-transgenic Alzheimer’s disease (AD) mice. Three-month-old mice had fisetin added to their food. By 9 months of age, mice that had not received fisetin began performing more poorly in water mazes, a standard test of animal learning and memory. Mice fed fisetin daily performed as well as control mice without the Alzheimer’s transgene at both 9 months and 1 year old. The researchers next found that in AD mice with memory impairment, pathways involved in cellular inflammation were activated. In fisetin-fed AD mice, those pathways were dampened, and anti-inflammatory molecules were activated. The researchers plan to further probe the molecular details of how fisetin protects memory and study how the timing of fisetin doses affect its influence on AD and whether fisetin can reverse declines in memory once they have already appeared. This has been the Medscape Neurology Minute. I’m Dr. Alan Jacobs.

I am a Behavioral Neurologist & Neuro-Endocrinologist with more than 27 years of experience and practice.
View all posts by Anton Coleman, MD →
This entry was posted in Uncategorized and tagged alzheimer´s desease, behavioral neurology, dementia, Dr Alan Jacobs, mindfulness, neurology, prevention. Bookmark the permalink.